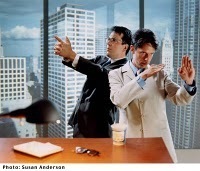 You never outgrow your first favorite band.They Might Be Giants @ Le Poisson Rouge"They Might Be Giants may have a reputation for attracting a nerdy, left-of-mainstream crowd, but the line still wound around the block outside of the swanky Le Poisson Rouge for their Saturday-night concert. Still, their reputation preceded them: 'You guys like children's music this much?' one snide commenter spat at the queue, adding insult to injury right as the rain switched from a thin drizzle to a steady soak.<o:p></o:p> Children? Hardly—the crowd was 18+ by design. Yet it wouldn't be wrong to say that teenage nostalgia brought many out in the rain that night."