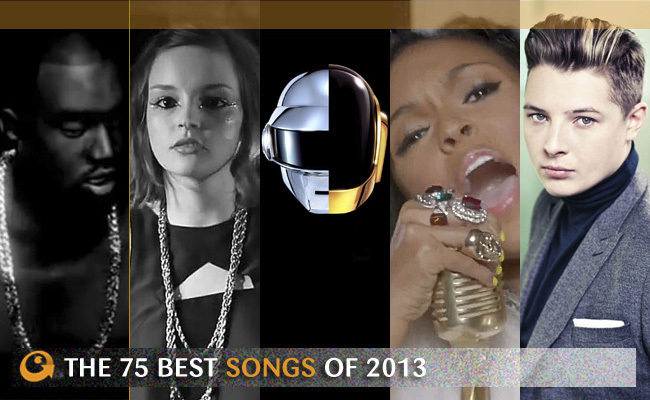 I love participating in the year-end pop-culture round-up that PopMatters puts together every year. I contributed two blurbs to the list of best songs—albums should be next.

No. 16
Vampire Weekend - “Diane Young”
“Diane Young” is Vampire Weekend by way of Buddy Holly, albeit if an amped-up Buddy Holly had a bunch of sonic tricks to enhance his singing of “baby, baby, baby”. Holly may have been an influence on the lyrics as well as the sound, since “Diane Young” is about, well, dying young—the wordplay showing that the band has no intention of giving up the brainier aspects of their songwriting—only done in a catchy, upbeat way that steers clear of the usual moroseness that results when contemplating mortality. “Diane Young” almost conceals its inventiveness. It feels like a straight-ahead rock track and, coming in one, sub-three-minute burst. It cements Vampire Weekend’s status as creators of songs you can listen to four times in a row before you even realize it.

No. 24
Haim - “Days Are Gone”
Haim sisters Este, Danielle, and Alana packed the first half of Days Are Gone with quite a few top-10-worthy songs, but it’s the title track that shows that they’re not afraid to make pop music that prizes '70s Fleetwood Mac songwriting, '80s electronic drums and keyboards, and early '90s R&B over the typical trademarks of today’s pop songs. The result is simultaneously familiar and refreshing. The quietly chanted, repeated refrain of “Days Are Gone” offers an antidote to the current pop radio ballads that can’t help themselves from leaning too often and too hard on big, belted choruses. In that way, it’s almost hard to tell that the song was co-written with the UK’s Jessie Ware and Kid Harpoon (and recorded in London), especially since it’s still imbued with the L.A.-chic vibe that made us notice Haim in the first place.