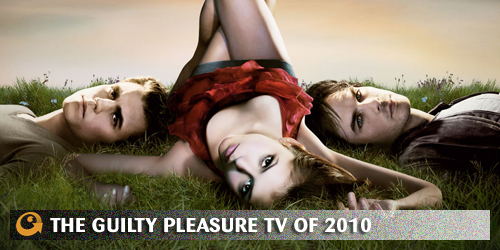 The Guilty Pleasure Television of 2010

No. 6: Say Yes to the Dress
"Brides-to-be tune into TLC’s Say Yes to the Dress, a reality show that takes place at the tony Kleinfeld’s bridal salon in Manhattan, for the sheer thrill of seeing a barrage of thousands-of-dollar dresses paraded across the screen. Mermaid, fit-and-flare, A-line, and ball gown confections float across the screen, and home viewers have the guilty pleasure of critiquing gowns that they might never afford to try on in the first place. 'This one is too over-the-top,' you might think. 'The first one flattered her figure better.' Yet even after the excitement of seeing new Pnina Tornai and Vera Wang gowns has waned, it’s still mesmerizing to see the way that women sell to other women. Other television shows—The Apprentice, for example—celebrate the hard-hitting, hard-sell approach that men take with each other in business. It’s much more rare to see the approach that female saleswomen take with female clients, and observing those intricate operations is the true guilty pleasure of Say Yes to the Dress."No. 3: 16 and Pregnant
"MTV’s docu-drama 16 and Pregnant evokes the guiltiest of all guilty pleasures: schadenfreude. 'No matter what troubles I’ve gotten to in my lifetime,' the viewer may think, 'at least I didn’t get pregnant when I was 16.' And, as callous as that may seem, it’s exactly the mission of the series. 16 and Pregnant doesn’t glamorize pregnancy and teen motherhood. Instead, it lays bare a thoroughly un-romanticized reality, full of painful labors, strained and broken relationships, the tedium and expense of raising children, and unrealized potentials and goals. Sure, the series regulars may become tabloid celebrities, but, given the choice, I’m sure that not many 16 and Pregnant fans would want to swap lives with one of its stars."Though those are the entirety of my blurbs, you can read the rest of the lists by clicking through to PopMatters.