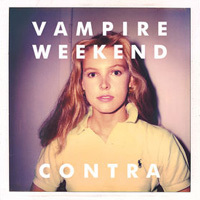 "As with its self-titled debut, Vampire Weekend’s sophomore effort almost hides all of its innovation—its ability to blend global sounds, straight-up indie rock, and electronic music—by making such an easy, simple pleasure to listen to. Much is made of bands’ tendencies to put up a 'difficult' second record, but Contra seems engineered to encourage maximum repeat listens—there’s nothing abrasive about it, so you can throw it on at any time. Listenable, however, shouldn’t be confused with simple: band member Rostam Batmanglij’s production is easy to take in, but it’s also lush, bright, and full of twinkling elements: a marimba here, a keyboard flourish there. The full sounds still supports lyrics in that preppy upper-class milieu that brought them scorn with the last album, with references to Richard Serra, Wolford’s, and 'living at the French Connection'. But it just goes to show that the band isn’t apologizing for what it is: a band that’s created in the same mold as Paul Simon and Talking Heads, isn’t ashamed to sing about frippery like organic toothpaste and San Pelligrino, and one that is thoroughly enjoyable to hear."