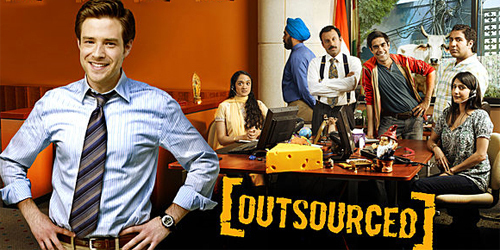 You might want to skip this one, guys: "As the series begins, Todd, fresh out of a management training program, has transferred to India to set up a new call center there for Mid America Novelties. He’s been told that his employees are 'B-team.' They didn’t study in the U.S. They don’t know American customs and can’t speak with American accents. Todd is tasked with turning the rag-tag bunch into up-selling machines. This is the central duality of the show: half fish-out-of-water tale about Todd, half underdogs-come-from-behind-to-triumph story about his staff.

The problem is that neither plot has a sound foundation. For the first, it’s hard to identify with Todd because he’s not very likable. When he sees the traffic in Mumbai and calls it 'insane, like "Frogger" but with real people,' Todd seems not only dim but also insensitive, at best. (Has he really never seen bad traffic before? Does he seriously not consider the callousness of comparing people to the digital pixels in 'Frogger?') Because we have seen traffic before, it is easy to feel more sophisticated than Todd, and even the thought of investing an entire season waiting for him to catch up is exhausting...

While Todd’s romantic interest in an employee might complicate the series’ second plot, where the underdogs triumph, the other staff members looking like cardboard cutouts make it downright feeble. In the premiere episode we meet a series of types: the quiet one (Anisha Nagarajan), the one who talks too much (Parvesh Cheena), the corporate weasel (Rizwan Manji), the one who’s fascinated by American dating customs (Sacha Dhawan). They may as well be the pixels from 'Frogger.'"

Follow the link to read the rest at PopMatters.