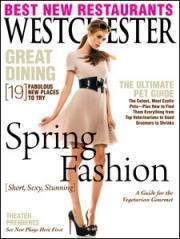 How Westchester is becoming a destination for emerging theater: No doubt, playwrights, directors, and producers benefit from trying out their new material on an audience of regular theater-goers. 'When artists do these kinds of readings in the city, industry professionals, critics, and bloggers show up,' says Anna Becker, curator and founder of the Insights & Revelations Performance Series, which has brought new works to the county since 2005. 'That’s exactly the kind of pressure that you don’t want when figuring things out. In Westchester, the audience is intelligent and savvy, but they’re not as critical as industry insiders. It’s the perfect place to try something out.'”First Kisses—Remembered One artist's Valentine's Day performance work: "What happens when you think about your first kiss? Do you smile sheepishly? Blush? Cringe? Marcy B. Freedman, an artist and art historian from Croton-on-Hudson, wants to know. She’s collecting these stories for a work of performance art titled First Kiss Remembered, which she will perform on February 12 from noon to 3 pm at the Peekskill Coffee House—right across the street from her art studio. We caught up with her to talk about the state of kissing in the county."Pet EventsWhere to party with Fido and Fluffy: "Your pup appreciates the finer things, but never gets invited to cocktail parties—until now. The SPCA of Westchester’s Top Hat and Cocktails gala invites people and their pets to put on their best duds and venture out together. After your portrait is taken by a professional pet photographer, take Spot to the doggie ice-cream bar while you enjoy drinks, hors d’oeuvres, and live and silent auctions."Teaming with Excitement Looking at a recent expansion to a local children's bookstore: "The [bookstore] is expanding—taking over the adjacent storefront, previously held by a rug seller—and nearly doubling in size. With the increased space, the shop is adding a tea salon with an assortment of teas, French-press coffee, hot cocoa, pastries and scones. 'I’m thinking of moms at three o’clock, when it’s too early to go home and start making dinner, and the kids might be getting a little fussy,' says owner Francine Lucidon. 'Instead, they can come here, and Mom can have her tea and the kids can have hot chocolate, and everybody can read their books together.'”February Cultural HighlightsAnthony Bourdain, Jim Breuer, Step Afrika, etc. March Cultural HighlightsA Woman's Life, Bernadette Peters, Randy Newman, etc.February Home Theater It's Kind of a Funny Story, Let Me In, Monsters, and A Woman, a Gun, and a Noodle Shop. March Home Theater TV shows: Mad Men, Treme, and The Walking Dead.