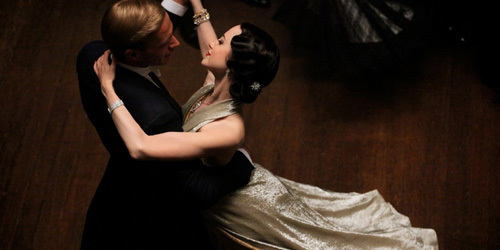 There's a Lot of Moviemaking Going on in W.E.

"...The jumps in time are not the only trick in Madonna’s directorial grab-bag. There’s a lot of moviemaking going on in W./E.. Madonna cuts a lot. She incorporates both 16 mm and Super 8 film. She pulls in tight on her subjects, honing in on faces, eyes, feet, and knicknacks with a not-so-steady steadicam. As the emotions get more and more heightened in the movie, the close-ups get closer, and the images shakier.

On top of all of those flourishes, she pans the camera constantly (usually as music swells in the background). In the one behind-the-scenes look included on the Blu-Ray—the sole extra feature, which lacks even a commentary—Madonna explains that her background in dance influenced her camera swirls and swoops, as she is inspired by “movement”. The intention definitely comes across, as she circles the camera around her subjects until it becomes almost dizzying.

Yet while the shooting style of the movie is very fluid, the look of the film also comes across as extremely stiff. Sure, half of the appeal of the movie is seeing Arianne Phillips’ costumes, especially with respect to Simpson, known for being a fashion plate in her day. (Phillips was nominated for an Oscar for her efforts.) But both Simpson and Winthrop are styled to within an inch of their lives. You never see errant locks of hair; their outfits are perfect. The extra feature included in the Blu-Ray notes that each woman has 30 to 40 costume changes throughout the film.

Their living quarters are similarly impeccably art-directed, thereby giving off the impression that no one actually lives in them. Madonna can move the camera as much as she wants—in the end, it still comes across like she’s filming carefully assembled magazine photo shoots."