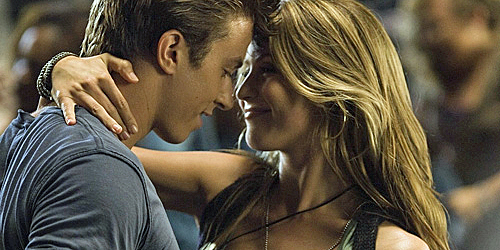 Shakin' It in a Pair of Red Cowboy Boots: 'Footloose'

The world didn’t need a remake of Footloose, the 1984 movie where outsider-rebel Ren McCormack (Kevin Bacon) takes on a town-wide ban against public dancing.  Even remake director Craig Brewer thought so at first, revealing in his meaty solo commentary that his first reaction upon hearing the project was, “You can’t remake Footloose! It’s Footloose!”

But this Footloose remake is pretty well done, with clever nods to the original alongside subtle improvements. Brewer is a natural fit for the material, being a self-admitted Footloose fan, a teenager of the ‘80s, a music-lover, a connoisseur of the South, and a parent, and all of which he draws upon to make the movie smarter than it needs to be.

For fans of the original, the wit becomes first becomes apparent through its references. The VW bug Kevin Bacon’s Ren McCormak drives in the 1984 version turns up in Brewer’s film, only the new Ren (Kenny Wormald) receives the car as a broken-down beater he has to fix up—a literal remake. In another scene, Brewer replaces Bonnie Tyler’s thoroughly ‘80s-sounding “Holding Out for a Hero” with a twangy, countrified version by Ella Mae Bowen, which works better in context.

But the new Footloose, thankfully, isn’t just a faithful retelling of scenes and backward-looking nods. Brewer grounds the movie in a way that would make sense even if there were no 1984 original. It starts with the central conflict. The catalyst for the dancing ban—a tragic car accident that’s only hinted at in the original movie—is heavily emphasized in the opening scenes of the remake. It calls to mind other instances where personal freedoms are sacrificed in the name of public safety, which makes it feel more contemporary.

Click through to read the rest of the review at PopMatters