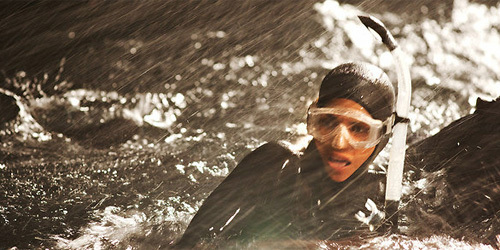 The rest of Dark Tide picks up a year later, and clarity does not come with the passage of time. Mathieson, still saddled with guilt, has traded free-diving with sharks for a life as a safe-and-boring (and financially strapped) seal-watching tour guide. Her estranged husband and former documentarian Jeff (Olivier Martinez) returns with a proposition to make her some money and get her back in the water, taking a wealthy adrenaline junkie, Brady (Ralph Brown), and his son out to go swimming with sharks. Though Mathieson is angry with Jeff, haunted by Themba, opposed to shark tours, certain that the dive would be too dangerous for the inexperienced visitors, wary that mating season would make the sharks quick to bite, and hostile to the idea that she should give into the whims of a craven thrillseeker just for his money, she agrees to take him, anyway.

No, it doesn’t make sense. And it just gets murkier from there until the visuals of movie become as confused as the narrative, eventually devolving into an indistinguishable group of people in black wetsuits swimming on a black ocean against a black sky in a tumultuous rainstorm. Yes, that’s the climax of the movie—and it is near-impossible to follow.