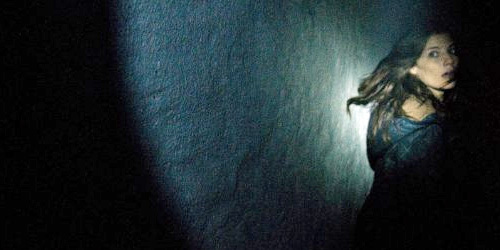 'Chernobyl Diaries' Is Like the Real Chernobyl, in That There's Nothing There

The characters, thin and stock to begin with, keep finding ways to be disappointing. Over and over, they find themselves in situations where they know they should run and find help from outside of Pripyat, but they keep getting distracted from this life-saving mission to rescue friends that have gone missing, to scream and cry about friends they find worse for the wear, or to investigate strange and scary noises coming from somewhere in the distance. Repeatedly, they muster up heroic courage to go charging—unarmed and unprepared—after a strange sound or vision, only to run away again when they discover that, yes, something unsavory was the cause.

Sure, they’re under fire from multiple threats. Before they realize that Pripyat might not be entirely abandoned, they find themselves on guard against hungry wild animals (mostly ravenous dogs but once, hilariously, a wayward bear) and the contamination that still exists in pockets in the site. (The characters carry a Geiger counter to warn them against high levels of radiation.) However, these forces pop in and out of the story at will, and they’re never used to build a feeling of mounting suspense or dread.

By the time the real boogeymen of the movie are introduced, even the location has lost its luster. The characters are lured into underground tunnels, abandoned hallways, and darkened rooms—they really could be anywhere. This is one of the few horror movies where the atmosphere is spookier and more interesting during the daytime, before any of the haunts have come into play.