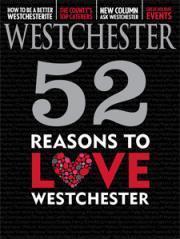 I've been a bit behind on posting recent articles, so forgive the pile-up. The December issue just came out, and I had the pleasure of writing the cover story for it.52 Reasons to Love Westchester
"Most people assume that people who live in Westchester are going for a New York City Lite experience. It’s an easy mistake to make, since we eat BLT steaks, get our hair cut at Devachan Salon, shop for new wardrobes at Rothman’s, and commute down south for a job, a night out, or a Broadway show. The truth is, while we may spend a lot of time in the City and patronize City-based businesses, we choose to live here precisely because Westchester is not New York City. We want to give up the steel and concrete for a little bit of greenery and some breathing room."Guitar Hero
A profile of local guitar-maker Rudy Pensa: "Pensa got his start building guitars when he was just 13 years old. 'In Argentina, when I was playing in the late sixties and early seventies, it was difficult to find good instruments,' he says—so he started building his own. He opened the famous-among-music-geeks Rudy’s Music Shop in New York City in 1978 and has been commuting there from Scarsdale for almost three decades."7 Days of Holidays
A round-up of local holiday events: "For you, our true loves, we present seven sets of seasonal events—no leaping lords or milking maids required."Culture, Etc.
Sharon Jones and the Dap-Kings, the Subdudes, and more.Home Theater
Harry Potter and the Half-Blood Prince, District 9, Inglourious Basterds, and (500) Days of Summer.November Culture, Etc.
Neko Case, Linda Eder, and more.November Home Theater
Star Trek, Up, and more.October Culture, Etc.
Sumi Jo, Wallace Shawn, and more.October Home Theater
Drag Me to Hell, Karloff & Lugosi, and Trick 'r Treat.Halloween Happenings
A round-up of Halloween events.Where the Pros Go for Halloween Clothes
A look at the best costume shop in Yonkers.Witch Craft
A Q&A with The Blair Witch Project's Michael C. Williams