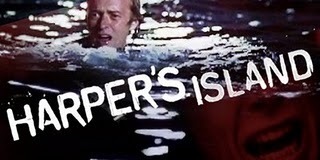 A cool-sounding genre series doesn't live up to its promise in the first episode.Harper's Island: Series Premiere"Even without a killer traipsing around the island, this party would be in trouble. The bride has a boyfriend on the side. Her father is trying to stop the marriage. The female guests maraud around in their underwear, Henry’s uncle threatens to blackmail his father-in-law-to-be, and Henry’s brother is suicidal. Even the flower girl seems pained, frying slugs with a magnifying glass and looking generally creepy."