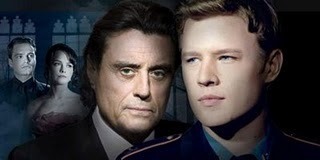 I got to review the craziest new show on television.Kings: Series Premiere"Repeatedly, Kings shifts from personal to political conflicts, intimating that they are, after all, the same thing. Whether disputes occur between two nations or two people, all the relationships here have to do with power. Players do what it takes to get and keep it, exploiting others and making sacrifices. King Silas and David Shepherd are alike in that they both wonder if, in the end, those sacrifices are worth it."