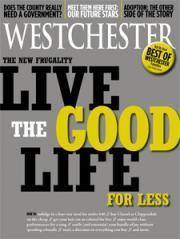 Our Frugal Guide certainly couldn't have been better-timed, wouldn't you say?The Backyard BacklotThe Jacob Burns Film Center, the go-to spot for film nerds in the county, gets even better by opening up a new Media Arts Lab for film education: "The building itself, situated on the corner of Manville Road and Grant Street, just down the street from the Jacob Burns Film Center, is special enough to warrant its own making-of documentary. The whole thing is LEED-certified, meaning it’s held to the greenest of standards. The offices are made of recycled materials, work off of natural light, are heated and cooled by geothermal energy, and have solar panels up on the roof—as well as a roof-deck perfectly suited for a swank film premiere party."Oxen FreeHow this year's designation as The Year of the Ox bodes for 2009: "Craig Haney, livestock manager of Stone Barns Center for Food and Agriculture, praises the animals for their industriousness. 'They literally put their shoulders into their work,' he says. 'If you think about our current financial crisis, we’re going to be seeing a lot of that this year.'"Culture, Etc.Edwin McCain, a New York animation exhibition, and more.Home TheaterBreakfast at Tiffany's, Pineapple Express, Repo! The Genetic Opera.Assigned: Give Her the SlipFirst-person essay: "When moving from LA to Westchester, climate isn’t the only reason for a change in wardrobe, says DeLauné Michel, author and founder of Spoken Interludes, a literary salon."