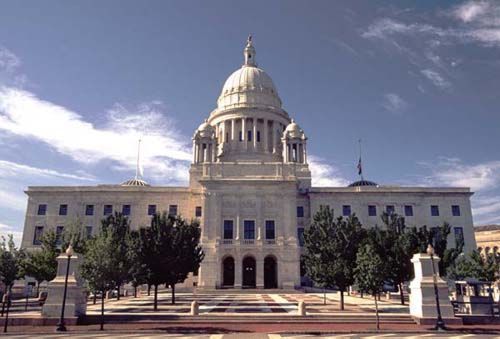 I did a slideshow featuring every state capitol building, the year it was completed, the architectural style (hint: most are neo-classical), when it is open to visitors, and an interesting fact.

Rhode Island State House
Providence, Rhode Island
Year completed: 1904
Architectural style: Neo-Classical
FYI: The lobby of Rhode Island’s State House holds two Civil War-era cannons; one was used in the Battle of Gettysburg, the other in Bull Run. The Gettysburg Gun, as it’s called, still has an iron cannonball lodged into it, melted into place from the heat of a Confederate shot that hit it. (Until the 1960s, it also contained the gunpowder.)
Visit: Guided tours are available daily; schedule them through the Secretary of State’s office.