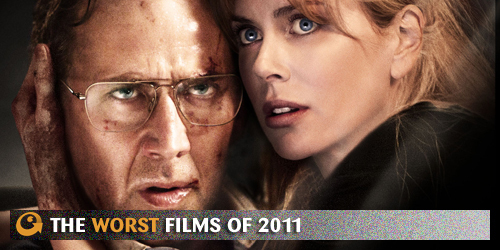 I contributed two blurbs for PopMatters's list of the most terrible films that came out last year.

The Worst Films of 2011 No. 8: AbductionTrue, spoilery fact: There is no abduction in Abduction. Sure, main character Nathan, played by Twilight’s second-fiddle Taylor Lautner, sees his own face on a missing-persons website. But it’s not because he was abducted as a child—and the real reason is almost too stupid to go into. (It was a trap so the bad guys could lure him out of his safe, secret-agent-led foster home?) What follows is a series of fights and chases led by the ultimately charisma-less Lautner, who doesn’t really sell his character ultra-trained CIA spawn, but is even less convincing as a normal teenager. What’s most confusing of all is how director John Singleton and actors like Maria Bello, Sigourney Weaver, and Alfred Molina got dragged down with him. No. 3: Just Go with ItLet’s see what Adam Sandler had been doing surrounding Just Go with It. He played a rich guy with a hot wife in Grown Ups. He played a rich guy with a hot ex-wife in Funny People. Immediately following Just Go with It, he played a rich guy with a hot wife (and his awful twin sister) in Jack and Jill. Sandler’s most interesting comedies arise when he creates a character—either real people with real flaws that drive the action, like Billy Madison, or strange outlandish types like in Little Nicky. Now, he seems content with being the normal, rich dude who puts in the minimum amount of effort to woo whatever young actress is roped in to play his love interest. Just Go with It is the peak of this sort of Sandler laziness. He has to choose between the young paramour he’s been chasing (Brooklyn Decker) and his female best-friend-all-along (Jennifer Aniston). What’s unclear by the end of the movie is what, apart from his successful plastic surgery practice, either of them see in him. Click through to read the rest of the list at PopMatters.