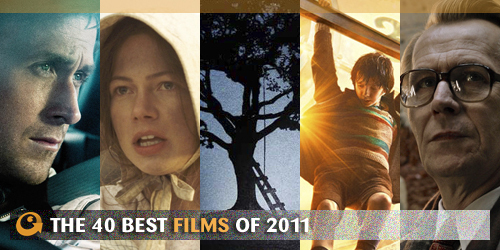 I voted, then contributed two blurbs for PopMatter's list of best movies.

The 40 Best Films of 2011No. 27: Super 8 In a year full of film nostalgia, Super 8 does double-duty, recalling the Amblin movies of the ‘80s while also touching on the joy of making homemade low-budget movies (and the never-ending quest for “production values”). While the monster-movie aspect of Super 8 is its weakest facet, its ensemble of youngsters is as strong as you can find in this year or any other. They’re plucky without being typical “movie kids”, their feelings ring emotionally true for adolescents, and director J.J. Abrams really nails the way a group of kids all talk over each other. As much as Super 8 made me think about the movies from my 1980s upbringing, what it really made me nostalgic for is hanging out with a gang of awkward-but-creative  pre-teens. No. 13: The DescendantsAlexander Payne’s most recent movie comes with the strong script we expect from him, effortlessly weaving one family’s personal tragedy into the history of Hawaii with a laid-back, island-time pace. But what’s most remarkable about The Descendants is how Payne coaxes great performances from unlikely places. Sure, George Clooney, who carries the meat of the storyline, is as good as ever. But supporting him are career-making turns from Shailene Woodley (best known from The Secret Life of the American Teenager), Judy Greer (normally relegated to playing rom-com best friends), and Matthew Lillard (most often used for his goofball qualities). You wouldn’t expect to be able to throw a teen soap star, a perpetual best friend, and the comic relief onto an island together and get something so emotionally rich from them, but Payne did. Click through to read the rest of the list at PopMatters