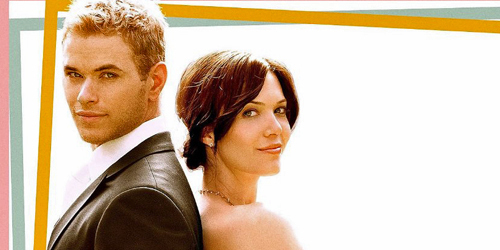 "Yet it’s not the premise to Love, Wedding, Marriage—and its strict romantic view that equates divorce with failure—that is the movie’s biggest flaw. Instead, it’s the way the film uses its premise to indulge the worst romantic-comedy tropes, scenes featuring zany speed-dating, bad karaoke, soap-opera-style revelations, a fake suicide attempt, schmaltzy third-act toasts, multiple uses of the phrase 'once upon a time', dramatic revelations, and wacky marriage therapies, plural. Did I mention that Ava has a three-week deadline to save her parents marriage before their big, surprise 30th anniversary party that she refuses to cancel?

Love, Wedding, Marriage goes for broad, just-shy-of-slapstick humor. Only Mulroney doesn’t have a feel for the right tone, rhythm, or look of a romantic comedy. In one scene, the marriage therapist that Ava sends her parents to—played by Christopher Lloyd in the most disappointing cameo of his ever put to film—has them run through some pre-therapy exercises that includes them hopping around and snorting air through their noses. Surely, this was supposed to be played for comedy.

In reality, there’s nothing really all that funny about watching Jane Seymour and James Brolin flopping around on screen. It’s almost more sad than funny. When Mulroney tries for some more directorial flourishes, he favors the more dramatic series of extreme close-ups, lingering ponderously on Mandy Moore’s face.

Then again, there isn’t much in the material to elevate with better direction. Much of the dialogue, written by Anouska Chydzik and Caprice Crane of the recent 90210 and Melrose Place reboots, is therapy-speak. People often say exactly what they feel. They talk about fulfillment, prioritizing, and validation. If there is a single least-funny word in the English language, it just might be 'prioritizing'."