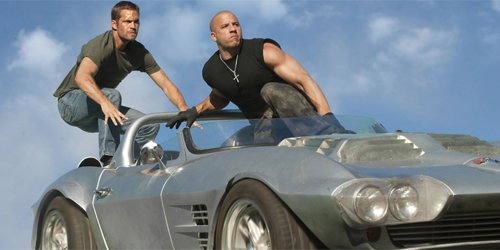 'Fast Five' Is as Fun as When You Were a Kid, Smashing Your Toys Together

From the opening moments of the movie—when two flashy muscle cars conspire to collide with the prison bus, which tumbles and rolls and everyone walks away without a fatality—it’s clear that Fast Five is going to be at least a little silly. The characters drive off cliffs and leap out of windows and suffer neither broken bones nor scratches and bruises. It is, however, aware of its own outlandishness. “There’s nowhere in the world where people with cars hang out with models. We get that,” director Justin Lin says in his solo commentary on the movie’s extended edition, which runs a full one minute longer than the theatrical cut. But there’s no harm in running away with the fantasy of it. In the commentary, Lin suggests that everyone just “embrace the ridiculousness of it.” There’s no reason not to, since going along with it means you get to see high-powered cars going up against buses, trains, and, eventually, bank vaults. The joy is similar to the one you experienced when you were a kid, smashing your toys into one another—only the movie has far more expensive toys. Lin estimates that more than 200 cars were destroyed during filming. Click through to read the rest of the review at PopMatters.