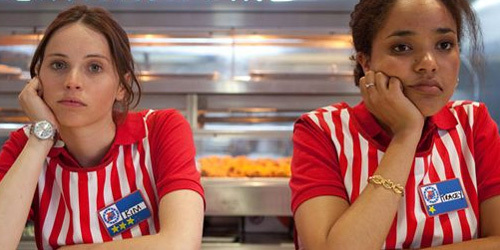 To Watch 'Chalet Girl,' You Have to Really, Really Suspend Disbelief

As a pair of convenient sportscasters will helpfully explain in the first few minutes of the movie, Chalet Girl is the story of Kim Matthews (Felicity Jones), a championship skateboarder who gave up the sport after a family tragedy. Three years later, she’s retired from the world of competition and working in a fast-food restaurant to support her hapless father (Bill Bailey), until she lucks into a job at an upscale ski resort that takes her from her native England to the mountains of Austria.

Once in the Alps, Chalet Girl takes on a fairytale quality, like Cinderella with extreme sports. This is more for its improbability than its magical qualities. After all, it’s as if a fairy godmother got Kim the chalet gig, since the movie makes a point of showing how unsuited she is for the job. In her interview, she drops plates, is unable to match a wine glass to its correct purpose, and doesn’t display the grace and manners of the other people applying for the job. But, wouldn’t you know, a position needs to be filled at the last minute, and there’s no one else available for it, so off Kim goes.

Once at the chalet, she’s greeted by her two ugly stepsisters, Georgie (Tamsin Egerton), and Jules (Georgia King), frenemies for the rest of the film who keep reminding her how much of a fish-out-of-water she is. “A chalet girl who can’t ski?” remarks Georgie, and it comes across as mean even though it’s a fair point. Luckily, fairytale magic steps in once again, and Kim’s background as a skateboarder translates effortlessly into snowboarding, and Kim picks it up so quickly she decides to enter the big competition at the end of the season.

And yes, Chalet Girl has a Prince Charming, too, in the form of Jonny (Ed Westwick), the wealthy son of the chalet owner And, like the Prince Charming in most fairytales, his character isn’t entirely formed, and it’s hard to put a finger on what’s supposed to be desirable about him except for his station in life.

When it all comes together, much is improbable about Chalet Girl. Felicity Jones doesn’t look like a gritty skateboarder, no does she look like the Ugly Duckling that Georgie and Jules insist she is. It’s hard to believe that she would secure employment at the chalet. It takes a real leap of faith to believe Kim’s rapid progress from snowboard novice to pre-professional competitor.

The love story that develops between Kim and Jonny is the hardest to take in of all. To enjoy Chalet Girl, you have to give in entirely to the fantasy, because once you start to pick at the pieces of it, it all comes apart.

Even Kim’s great romance with Jonny is told through a succession of scenes of them frolicking in the snow. You start to wonder if, in a warmer climate, the two would have anything to talk about. This excessive shorthand is probably because Traill is used to working with a short amount of time to get his story across; with the exception of All About Steve, his credits are all for television.

And in the end, Chalet Girl feels more made-for-TV than anything else. The DVD features, too, seem ill-suited for a feature format or one-time viewing. There’s wealth of material, including a not-so-insightful commentary with Traill and Jones that mostly talks about where the scenes were shot. (The story is all there on the surface, so there’s not really much to address there.) But there are also interviews, behind-the-scenes bits, “viral videos” and “YouTube videos” that seem to punish all-at-once viewing. The interviews, for example, are a series of one-on-one Q&As with every single member of the cast. In each case, the actor is asked to describe the plot of the film from their character’s point of view. That means, if you select the “play all” feature, you get ten plot recaps in a row—and the plot isn’t that sophisticated to begin with. It’s hard to imagine who the producers had in mind when putting these extras together.

Ignorable extra-features aside, there’s nothing too taxing or offensive about watching Chalet Girl. It works if you’re looking for the bullet-points of a sports movie, protagonist-comes-into-her-own film, and romance all thrown in together. Nothing is too nuanced, and it’s easy to figure out who the villains and heroes are—just like in a fairytale.